Some 400 level students of Nasarawa State University, Keffi from the Department of Mass Communication in the Faculty of Social Sciences graduated yesterday, as they finished their final examination.
They were seen dancing, shouting and jubilating.

The students who wrote their last paper yesterday afternoon June 16th, 2015 filled up cars owned by their friends and course mates; played loud music while they danced and celebrated inside the cars.
The moved in a convoy to the Faculty of Arts, where they all danced and celebrated, they entered their cars again and drove off inside town playing loud music, shouting and celebrating along.
Zainab Umar, who was among the graduating student, was full of happiness and lack words to express her feelings. When asked how she feels, she simply reply “I feel cool”.

Similarly, a student by name Peace Abizmu said she is over joy for becoming a graduate after spending 5 years in a course that should have not taken more than 4 years due to the ASUU strike.
Also in the mood of celebration, Abizmu was taken by her neighbors to a small water logged area, where she was thrown into the dirty and muddy water which turned her white t-shirt to brown.
Another student in person of Mrs.

Salome Yahaya was shouting over joy after the examination on her way home, when one of her neighbor came to welcome her, she ran away thinking that he wanted to pour water on her.

When asked to describe how she feels, she simply said she is feeling graduate-graduate.
Frank Alaku, who is also a student from the department could not express how he feel, but said he thank God for making it possible for him to see the day.
All the students wore customized white t-shirts with their names on it, and with other write ups which could not be read because of lack of space to write more words. They carried markers along and gave to anyone who wishes to write on their t-shirts. 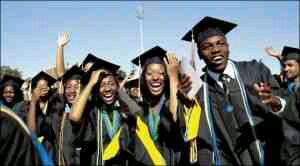