On January 4, 2014, 15 persons returned certificates issued to them by the West African Examination Council. During their individual exams, which spanned from 1983 to 2010, the 15 persons confessed that they were involved in various forms of exam malpractices, including impersonation. But now, as ‘born-again’ Christians, they said they could not live with the ‘sin’ anymore.
Similarly, on February 24, 2015, WAEC published a list of 178 candidates, who returned their certificates on the basis of being ‘born-again’ and seeking restitution. They reportedly confessed to hiring people to sit exams for them.
However, these candidates are rare examples. Cheating during examinations is quite common in Nigeria’s educational system.
This is despite the fact that the Examination Malpractices Act No. 33 of the 1999 Constitution stipulates a minimum punishment of N50,000 and a maximum of five years imprisonment without the option of fine for violators of the offences stipulated in the Act. Some of the offences listed include cheating during examination, stealing question papers, impersonation, disturbances at examination, obstruction of supervision, forgery of result slip, breach of duty, conspiracy and aiding.
The law has not deterred some candidates from engaging in these tricks. Here are 20 ways students cheat during exams:
Some mischievous female candidates smuggle pieces of paper bearing answers — commonly known as chips — into the examination hall by hiding the chips in their weave-on or wig. The unsuspecting exam supervisor hardly suspects anything is amiss when the female candidate begins to scratch her hair.
“They (the candidates) would scratch their hair and after a few seconds, the chips would appear from underneath the hair,” says Edidiong Udofia, a recent secondary school graduate.
What a cheating candidate does in this method is to purchase a substantial amount of bubble gum, empty all of it, write the answers on the pieces of paper used to wrap the gum and then repackage it. An unsuspecting invigilator will not know that the bubble gum wrappers, in fact, are chips. Tobi Akinyede, now an undergraduate, recalls this method which she witnessed while in secondary school.
Akinyede said, “Bubble gum is usually not prohibited in the exam hall, and when the invigilator sees a candidate with it, they assume the person needs it to concentrate or maybe to prevent falling asleep in the hall.”
An increasingly common technique of cheating in exam halls is the use of mobile devices. In the past, candidates would sneak a phone into the exam hall by concealing it in their underwear or socks. But a newer approach that has been noted involves dismantling the device and hiding the bits under various clothing items. It is one of the techniques which exam bodies, including the West African Examination Council, have started devising means to tackle.
The Public Affairs Officer, WAEC in Nigeria, Mr. Demianus Ojijeogu, noted that most candidates are not aware of the strict rule against bringing mobile phones into the examination hall. He said, “Once, I was in an exam hall during an Economics paper. I saw a candidate with a phone and I seized it. As I was holding the phone, text messages, which contained answers to the objective and essay questions, started trickling in. But the candidate denied the phone was his.” The exam body said the offence attracts cancellation of the culprit’s entire results.
For ill-intentioned candidates who are not brave enough to sneak in chips or mobile devices, it is common to resort to non-verbal communication with other candidates during exams. This approach which is handy especially during multiple-choice exams, is a form of encryption which makes use of the fingers. Edet Ekpo, a senior secondary school pupil, noted that the method involves a group of candidates, prior to a paper, agreeing on which finger represents what option. He said, “Holding up a thumb could represent option A; holding up both a thumb and an index finger could represent option B, and so on. 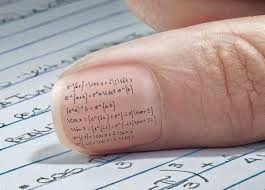