It has been revealed that no fewer than thirty three persons will be awarded 1st Class Honours certificates at the 12th Convocation Ceremony of the Ladoke Akintola University of Technology, Ogbomoso (LAUTECH) which will take place on April 23 . 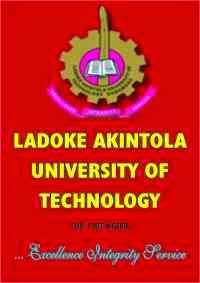 The Vice-Chancellor of the university, Prof. Adeniyi Gbadegesin, stated this in Ogbomoso, Oyo State, at a briefing to herald the institution’s 12th convocation.
Gbadegesin disclosed that a total of 4,697 first degrees and over 9,000 higher degrees  would be awarded during the ceremony. In addition to the 33 students that bagged first class honours, 1,144 bagged second class upper division honours, 2,575 bagged second class lower division honours, 692 bagged third class honours while 140 graduated as nursing students.
The VC explained that the convocation ceremonies starting on April 23 would coincide with the 25th Founder’s Day ceremony of the university.
Share :
Tweet
✚