The latest protesters included the students of the University of Lagos and members of the Youth Action for Success. 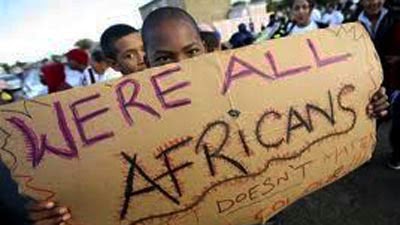 The UNILAG students on Monday staged a protest at the South Africa’s High Commission, Lagos, while the YAS members took to the streets of Enugu on Tuesday.
The UNILAG students delivered a protest letter to the South African High Commissioner, Amb. Lulu Mguni, giving the South African authorities a 24-hour ultimatum to either stop the attacks or face a boycott of businesses and products from the country.
The students came in three buses, one of which had ‘Aluta missile’ on the number plate.
One of the students that participated in the protest told our correspondent that the demonstration had been planned to move on to major South African companies on the Lagos Island but that the police stopped the protesters.
He said, “We issued a 24-hour ultimatum for the appropriate authorities of South Africa to stop the attacks or they risk a boycott of their businesses and products in the country. We will be the ones to champion the boycott.
“We were to go to a major South African company on Tiamiyu Savage Street but armed policemen resisted us and we cancelled our trip.”
The Lagos State Police Public Relations Officer, Kenneth Nwosu, confirmed the protest.
He said, “The students, under police protection, demonstrated at the South African High Commission. They made attempts to go to the DSTV and MTN offices but were appropriately advised in the interest of security.
“They peacefully departed after a hitch-free protest.”
In Enugu, the youths, who protested on the streets of the coal city, demanded an end to the attacks within 48 hours, failing which South African investments in Enugu State and other parts of Nigeria would be destroyed.
The youths, under the aegis of YAS, carried placards with various inscriptions. Some of the placards read, “No to mindless killing of Nigerians”, “Stop this xenophobia now” and “Don’t tempt our patience”, among others.
Speaking to journalists during the rally, the leader of the group, Jesechai Okezie, said the South Africans had not been grateful for the hospitality of other Africans.
He said, “We are not happy that Nigerians are being brutalised and killed in South Africa.
“We allowed South Africans to come here and operate; they have Shoprite, Multichoice, MTN and a host of other investments here.
“So why are they killing us? Why are they brutalising us? Why are they denying us of our economic rights?
“We love other nationals here in Nigeria, we treat them with the highest level of hospitality, but this is what we have got in return.”
Demanding an immediate end to the attacks, Okeke said, “These killings must stop forthwith.
“We are giving the South African government 48 hours to ensure that these killings and looting come to an end.
“The President of South Africa must assure the world that the lives and properties of Nigerians are safe; if they don’t do that, we are going to react and our reaction will be disastrous.
“We are asking Nigerian youths to remain calm.” (Punch Newspaper)
Share :
Tweet
✚