We are dedicating this thread towards enlightening candidates seeking admission into higher institutions on what the recently proposed JAMB Admission screening model for admissions actually means.

For the sake of emphasis and clarity, the raw facts will be omitted. What you have here is the interpretation of the raw facts to allay the confusion of many candidates. But if you are interested on the raw facts, you can find that
HERE .

Similarly, each grade will now have its equivalent points/marks in this manner; A=6 marks, B=4 marks, C=3 marks which means the having better grades in your O'level result gives you a better chance of securing admission..

For instance you may be given provisional admission to study MBBS in UNIBEN by JAMB having obtained a UTME score of 260. If your institution's cut-off point for medicine is 95 points and you come below that number of points after the screening, you will likely be denied admission.

4. Admission process will still put into considerations factors like catchment area and ELDS (Educationally Less Developed States) in determining the number of candidates admitted. Admission by merit is 45%, catchment area 35% and ELDS 20%.

5. Schools are still at liberty to charge a certain fee for the screening of candidates. However, the Board did not stipulate how much institutions are to charge for this. 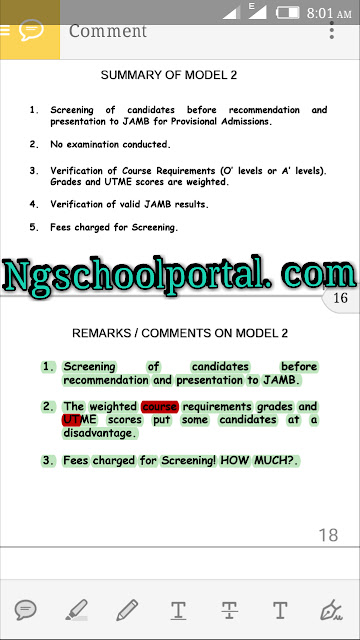 Nice Info
I know students will find pleasure in reading it.
keep it up