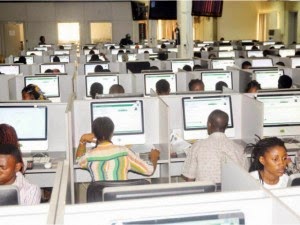 Candidates that participated in the 2015 UTME can access their performance two hours after leaving the examination hall.
While monitoring the conduct of the examination at the Board’s Computer Based Centre in Bwari Area Council of Federal Capital Territory, Abuja, the Registrar and Chief Executive of JAMB, Dibu Ojerinde, revealed that 97,400 candidates who sat for the examination on the first day already got their results through test messages.
For candidates who are at disadvantaged areas and can hardly operate the computer, Ojerinde said “CBT has taken two years to advance and can only get better in subsequent years and once the candidates operate their phones, they can as well be able to operate the computer.”
Also speaking at the monitoring exercise, JAMB’s Board Chairman, Peter Eze, said the CBT can be adjudged as 90 per cent successful. Mr. Eze said the proposed general election now scheduled for March 28 and April 11 affected preparations for the examination and made the board to fix the examinations within 14 days before the elections.
A candidate, Samanja James, who applied for Mass Communications at the University of Jos said, “the new examination method has made student all over the country to be computer literate.
“The system is faster and I can tell you that before now, many of us did not know how to operate a system. But with the new CBT, candidates have no choice than to learn it as fast as possible since there is no alternative means of writing the exams,” she said.
Another candidate, Chris Enejo, who applied to study mathematics at University of Lagos, said JAMB should improve in subsequent examinations. He said the system is faster for people who can use computers.
Share :
Tweet
✚