EKSU Lecturers On Strike Over Non-Payment of Salaries 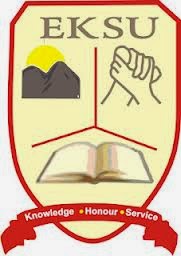 Academic staff members of the Ekiti State University, EKSU, Ado Ekiti, on Tuesday declared an indefinite strike over non-payment of their two-month salaries (January and February).
The Chairman Academic Staff Union of Universities, Prof. Olufayo Oluodo, said the academic staff had no option than to stay away from work because non-payment of their salaries had made life difficult for them.
Oluodo said, “Our members have no money again to be moving up and down, we are being owed two months and we have not been paid at all this year.
“We have made our position known to the university authorities and we have written to the state government on the matter.
“We have met with the Deputy Governor to resolve the matter and another meeting with government has been slated for tomorrow.”
There were indications that the Senior Staff Association of Nigerian Universities and the Non-Academic Staff Union might also declare an indefinite strike to press home their demands for January and February salaries.
A source from the university said, “The ASUU is on strike, but we will like it if other unions join us too because they are also affected.”
MSG Team.
Share :
Tweet
✚