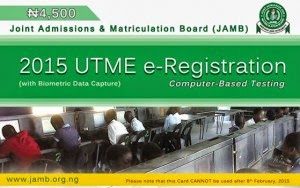 We published a post that contains almost everything that 2015/2016 JAMB UTME prospective candidates need to know. After the publication, we received tons of mails and calls regarding the actual price of the 2015/2016 JAMB UTME scratch cards and the locations to get them.
JAMB officially said the registration scratch card will go for N4,500 (four thousand five hundred naira only).
JAMB scratch cards are available at any Skye Bank, Zenith Bank, Union Bank, First Bank and also, NIPOST nationwide.
MGS Team
Share :
Tweet
✚