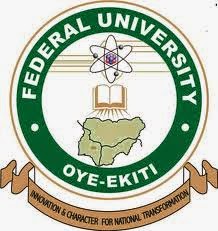 This  is to inform the general public and especially, all the newly admitted candidates into the Federal University, Oye-Ekiti (FUOYE) that the varsity’s fourth matriculation ceremony for the 2014/2015 fresh students date, venue and time has been announced.

FUOYE 2014/2015 fresh students’ matriculation ceremony has been scheduled to hold on February 6, 2015 at the University Main Auditorium, Oye-Ekiti. Time: 10.am.
Share :
Tweet
✚