The new Registrar of the Joint Admissions and Matriculation Board (JAMB), Prof. Ishaq Oloyede, during the formal handing over ceremony in Abuja on Monday assured his predecessor, Prof Dibu Ojerinde of his willingness to continue the implementation of good policies he embarked upon.

He however added that there is still enough room for improvement and whether his tenure will be long, short or truncated is not really important. The important thing is for him to do his bit and leave the stage better than he met it just like his predecessors have done. He equally called for collective responsibility towards making the Board even greater.

He went further to reveal his five point agenda for the board which includes enhanced staff welfare, discipline, improved technology, transparency and advanced networking

Responding to this, the outgoing Registrar Prof. Ojerinde, expressed hopes that the new JAMB Boss will make the Board better.

“I am sure you will make things better than you found it. I am not surprised you are coming.” He stated.

He further called on the staff of the board to give the new registrar the same cooperation they gave him during his tenure. 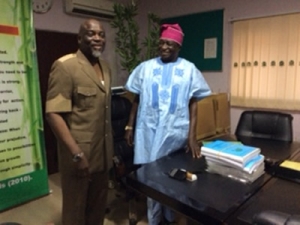